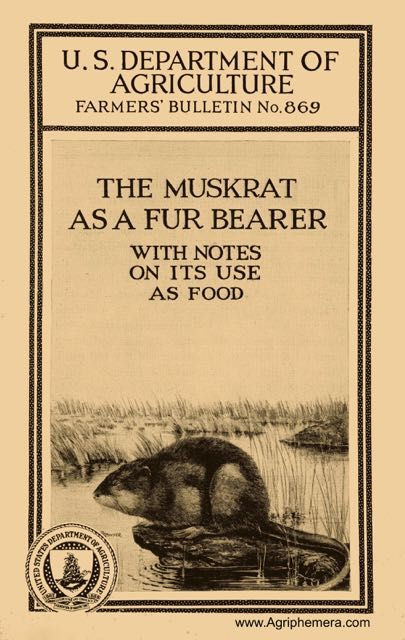 The Muskrat: With Notes On It's Use As Food

This informative 20-page bulletin from 1923 is all about the common muskrat... with recipes

Have you ever eaten a muskrat? Probably not. But, according to this 1923 Farmer’s Bulletin muskrats are not only edible, they were once labeled as “marsh rabbits” and sold in retail markets of several U.S. cities.

The average 1-1/2 pound carcass (less the fur) was sold for 20 to 25 cents in the early 19th century. This unique 20-page booklet tells how to properly prepare and cook fried muskrat, roast muskrat and stewed muskrat.

But considering muskrats for food is only a small part of the information in this bulletin. You’ll also learn all about the lifestyle and habits of the muskrat. The booklet tells some clever ways to trap muskrats, and there is a short discussion about the best way to home-tan the hides.

I never really knew much about muskrats before I read this bulletin, but now I feel like I know a lot about the little critters. I feel pretty confident that I could catch a few, and that I could even make a decent meal out of them.... if I had to.