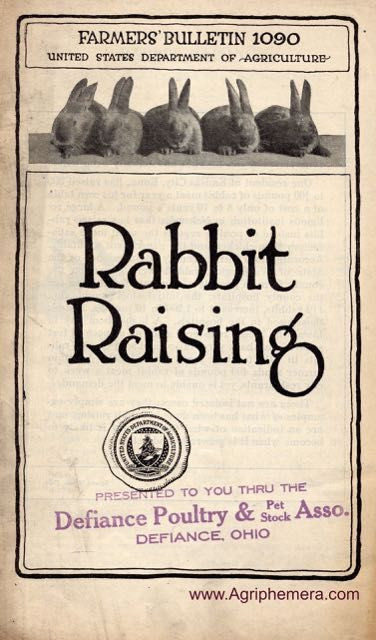 From inside the front cover...

“The saving and earning possibilities of rabbit raising are illustrated by the following concrete examples of what has actually been done:

One resident of Kansas City, Kansas, has raised 300 to 400 pounds of rabbit meat a year for his own table at a cost of only 8 to 10 cents a pound. A large religious institution in Nebraska that has raised rabbits instead of poultry reports the meat more satisfactory than chicken and the experiment profitable. According to a former county commissioner of the State of Washington, rabbits were grown on the county farm to provide a substitute for chicken for the county hospitals; the initial stock, numbering 119 rabbits, increased to 1,200 in 10 months, besides those used in the hospitals. A high-school boy in Iowa, who breeds registered stock on a space of 33 feet square in his back yard, raised and sold enough rabbits in 1918 to clear more than $1,200. An Ohio farmer sends 400 pounds of rabbit meat a week to city restaurants, yet is unable to meet the demand.

These are not isolated cases; they are simply examples of what has been done in rabbit raising, and are an indication of what this industry is likely to become when it is generally understood.”

Subjects covered in this bulletin include: